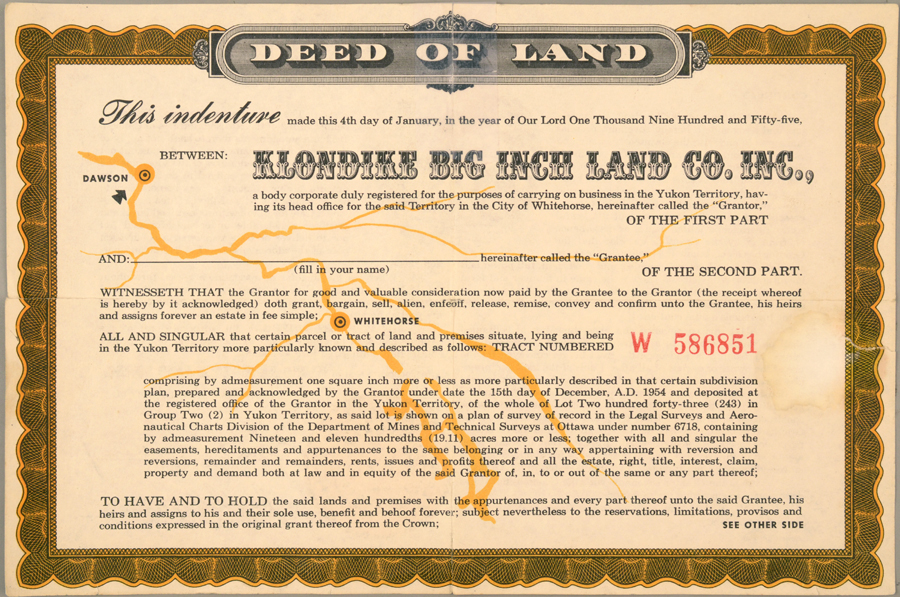 PROJECT STATEMENT
In 1955, the Quaker Oats Company launched the Klondike Big Inch Land Co. promotion. Accompanying boxes of puffed cereal, consumers received elaborate and apparently official deeds to one square inch of land subdivided from a plot outside of Dawson City. Capitalizing on romanticized notions of the North at the turn of the century, the promotion was a tie-in to Quakerʼs sponsored television show Sergeant Preston of the Yukon, and explicitly framed the titles in the context of the Klondike Gold Rush. Slogans such as “Get Free Gold Rush Land Today!” were wildly successful in capturing children’s imaginations and encouraging cereal sales. 21 million deeds were drawn up and rapidly claimed in a strange echo of the earlier rush.

More valuable than other cereal prizes, many of the deeds were saved through the years. However, they were never intended to have real property value. Quaker had considered the cost of so many land transfers unfeasible, and none were ever registered. To make matters worse, in 1965 the land was repossessed for non-payment of $37.20 in taxes. Over the last 60 years, generations of deed holders who didn’t read the fine print have contacted various administrative bodies, only to be redirected to Quaker and subsequently disappointed. The response from Quakerʼs legal department was that, “the real value of the deeds was based on the romantic appeal of being a property owner in the Great Yukon Territory rather than on any intrinsic value of a one-inch square of property.”[1] 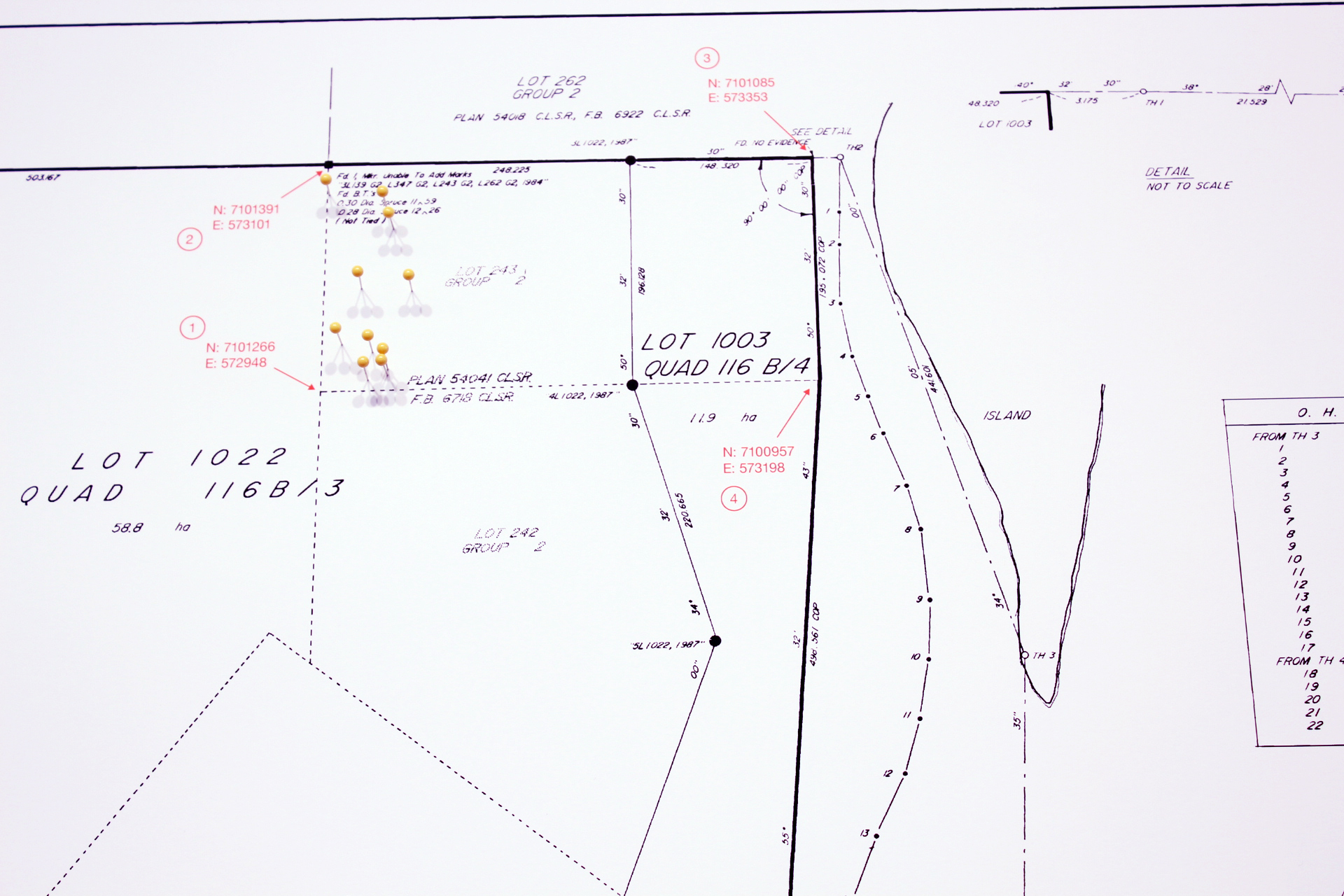 So the land was real land, but was never truly intended to exist anywhere except as an idea in the consumerʼs mind. This confusion, and the tension between the various partiesʼ expectations, nicely opens up the complicated relationship between land and landscape- between a physical place and the accumulated human and social lenses through which we view it.

Now fully detached from the land that they signify, Klondike Big Inch deeds are readily available for sale online. Revisiting this bizarre property and settlement microcosm, I have been collecting these deeds for the last year. While in Dawson, my project has involved locating each corresponding one-inch land parcel using survey plans and GPS. Using the physical deeds themselves as the material for tiny paper sculptures, I have built camps, homesteads, claims, and the various other built objects and environments of this second imaginary Gold Rush. Photographed on their respective lots, the scale of the resulting landscapes is confused, allowing the sculptures to become models for larger potential sites. In the end, I see the exhibited project as a complementary paradox: the imagined space of the deed finally made real by its location and documentation, and the real space of the land made imaginary- transformed into model, picture, and landscape.

KEVIN MICHAEL MURPHY is a Vancouver-based artist working primarily in three dimensions, using a variety of materials, often in combination with pre-existing systems, cycles, or organisms. From his contemporary urban perspective, and against a backdrop of growing environmental crises, Murphy explores the ways that humans interact with the living world around them in material, economic, and imaginative terms.

Murphy received his BFA from the University of British Columbia, Vancouver in 2009, and went on to work there for a number of years as UBC’s Drawing, Painting & Sculpture Technician. Past projects have included Atlantean Timepiece for UNIT/PITT Projects’ What Future series, and New Xanadu at the UBC Botanical Garden and Centre for Plant Research. This September he will begin his MFA at the University of Guelph.