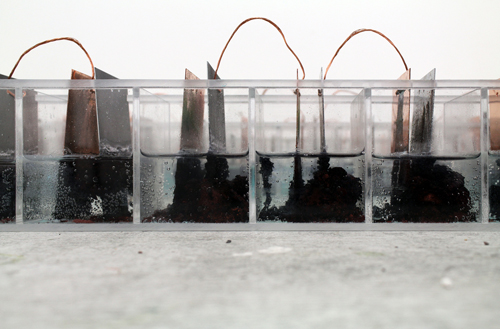 PROJECT STATEMENT
During my first visit to Dawson, in January 2010, I was driven up to the dome to look out at the vast intestinal tailing piles left by decades of dredging in the area. For me, this vista became the lasting image of my trip to the Yukon. In a town that boasts many historical monuments, these tailings seemed to represent the ‘authentic’ ruins of the Klondike gold rush.

Over the past several years, my work has focused on the remnants left behind in the wake of our industrial pursuits, and how we can preserve, memorialize, or simply move beyond the weight of these remains. In these works, I fuse printmaking, sculpture, and chemical experiments in exploring industry through the lens of fragility and impermanence, pushing printmaking beyond its traditional boundaries, as a re-enactment of the boom and bust cycles of industrial economies.

This project began with a quintessentially Klondike activity – a kind of treasure hunting. Over the course of several weeks, I walked along the dredge tailings, using a metal detector to excavate industrial cast-offs, amassing a substantial collection of rusted metal tools and fragments. 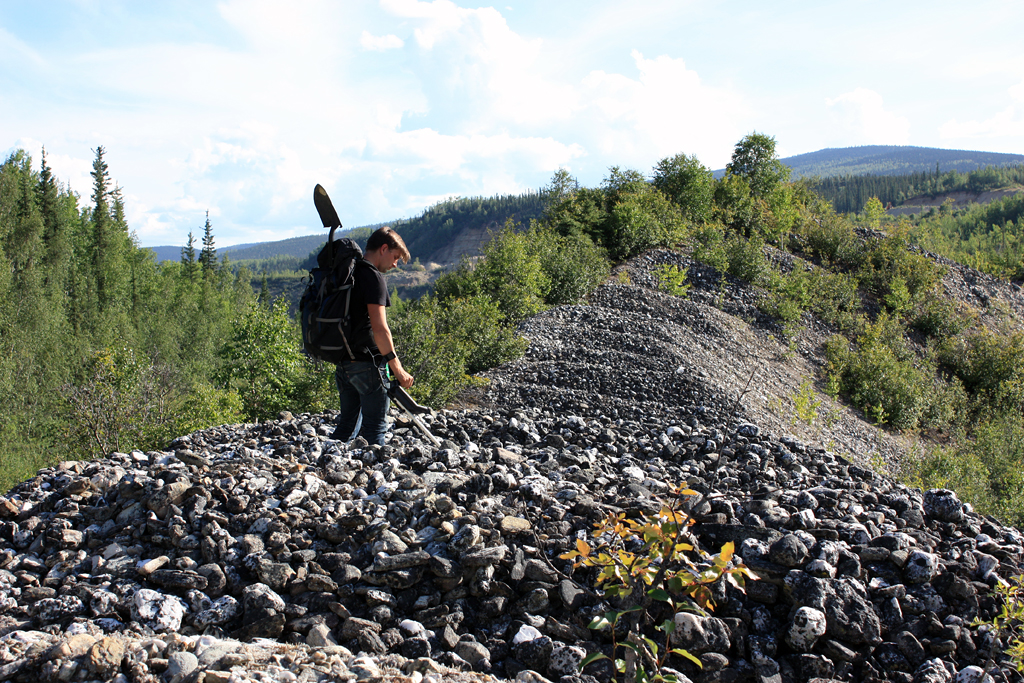 With this collection in tow, I brought it to the midnight dome, where I installed my Time Machine; a strange off-the-grid laboratory which became my home for a few weeks. Built with plexiglas, aluminum, and chemicals, this shelter adopts a design similar to Earthship architecture, but rather than environmental sustainability as its guiding principle, this bubbling chemical structure comes closer to the absurd inefficiency of many of our modern industrial pursuits. Powering this machine is a massive, roof-top battery, in which etching plates and etching acid power an electrolytic cleaning process to remove the rust from my scavenged artifacts. Once cleaned, I meticulously etched the markings left by decades of rust and erosion, forming a kind of topographical map. The result is a glistening surface that memorializes the artifact’s entire lifespan.

Overlooking the dredge tailings, this machine presents a kind of prototype for the preservation of degradation. As it stands now, our most sincere attempts to preserve this era are often counterproductive, a further erasure or gentrifying of these objects and spaces, resulting in a kind of nostalgic industrial utopia. With this project, I attempt to reintroduce the evidence of time, erosion and labour into the restoration process: the act of polishing bringing a sharpened awareness to the work that was once performed with these tools.

COLIN LYONS grew up in ‘Canada’s original oil boomtown’ of Petrolia, Ontario, an experience that has fueled his interests in industrial ruins and sacrificial landscapes. His recent work fuses printmaking, sculpture, and chemical experiments, pushing the role of the etching plate beyond traditional uses to create re-enactments of the rise and fall of industrial economies.

Lyons received his BFA from Mount Allison University (2007) and MFA in printmaking from University of Alberta (2012). His work has been shown in solo exhibitions across Canada, and in group exhibitions internationally. He has received grants from the Canada Council for the Arts, Conseil des Arts et des Lettres du Quebec, and The Elizabeth Greenshields Foundation, among others. Exhibitions include projects presented at Platform Stockholm (Stockholm, Sweden), The Soap Factory (Minneapolis, MN), OBORO (Montreal, QC), SPACES (Cleveland, OH), CIRCA art actual (Montreal, QC) Centre[3] (Hamilton, ON), aceartinc. (Winnipeg, MB) and artcite (Windsor, ON).

Lyons currently lives in Iowa City, where he holds the Grant Wood Fellowship in Printmaking at The University of Iowa.