Blurs of the Natural

When faced with the real, Toni Hafkenscheid blurs the edges – as we all do, in the end.  In this, his images not only represent their vistas, they also represent the imaginative possibilities for alternate perspectives… a multiplicity of visions that exist only in the blur of experience itself. Nature waits, not to be discovered but to be encountered, and in the encounter we manufacture our own perspectives on the questions – whether we focus on the image or the fantasy or the reality makes little difference – the details are in the blur…

Photography actually contributes something to the order of natural creation instead of providing a substitute for it… it produces an image that is a reality of nature, namely, an hallucination that is also a fact.
– Andre Bazin 1

When faced with the real, Toni Hafkenscheid blurs the edges – as we all do, in the end.  In this, his images not only represent their vistas, they also represent the imaginative possibilities for alternate perspectives… a multiplicity of visions that exist only in the blur of experience itself. Nature waits, not to be discovered but to be encountered, and in the encounter we manufacture our own perspectives on the questions – whether we focus on the image or the fantasy or the reality makes little difference – the details are in the blur…

The French film theorist Andre Bazin insisted that photography “embalms time,” like a death-mask for the eternally preserved moment. 2  Bazin’s analogy was to the gold-plated Egyptian sarcophagus, the guardian for the mummified flesh statues of spiritual perpetuity.  Flesh turned into a model of itself; a model of times past and a full-scale effigy that allows us to imagine the perpetuation of memory. Yet mummification is not the only preservation tactic; gold is only one side of the alchemical divide, and statuary only one way to imagine.  Consider another such story of gold: the Gold Rush of the Canadian North, and the permafrost fantasy of cryogenic preservation – coupled not, in this instance, with monumental burial chambers of pyramid stone but instead with the dancing coloured lights of an ephemeral night time sky.  Here, natural fireworks pierce the darkness of invisible night, and the result is larger than life.  And this story too relates to photography – for the dancing of lights has always been that upon which the image is modeled – not with the entirety of the night at its disposal, but with something poignantly similar: the liminal presence of perpetually fleeting moments that, without photography, would never exit from the blur of time itself.  There is a difference however, and it is that photography’s debt is not to gold but to silver – that alchemical ingredient which allowed the history of recorded images to begin. The dancing lights of the image world are, strangely, drawn to preservation within this black box of silver possibilities – the camera is a capture device for the embalming not only of time, but of light as well.

Now, it may have been Susan Sontag who called the camera a “predatory weapon,” 3 and Vilem Flusser who suggested that the photographer is a hunter, stalking the “wildlife” of the visible world. 4   But what Sontag never addressed, and what Flusser would never admit, is that this predator sees most effectively with peripheral vision.  It is in the periphery of the gaze that one sees movement and motion, though the details themselves may be blurred.  It is, in other words, in the peripheries – in the blur – that the context for the image inevitably lies. In this sense, to “embalm time” is to literally embalm this blur itself – to preserve the moment not only for its literal presentation, but for its temporal and illuminated and imaginary specificities as well.

But aren’t these specificities precisely why the work of Toni Hafkenscheid can speak both so poignantly and with such familiarity to a world we know but have never seen?  The world we know is larger than life – so large, in fact, that our personal perspectives can never be adequately represented.  Blurred at the edges, these images are more faithful to the realities we know than to those that exist right before our eyes: more photographic than the photograph itself.  These are images that also tell stories; images implicated in the act of their documentation; images which have been embalmed not only for their timing and light, but for their contexts too.  In other words, Hafkenscheid has mobilized a process that amplifies the possibilities of the original.  These are not mere scenes uninhabited by the human gaze (and therefore – according to the tropes of photographic logic objective or universal).  Instead, these are isolated moments that open themselves up to imaginary inhabitants – ourselves. These moments are habitats for the imagination itself. 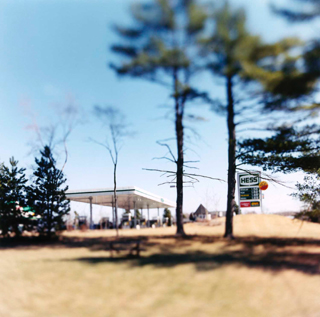 These inhabitations of an irrecoverable moment naturally cause some discomfort.  The implication of the imaginary, however, amplifies this effect.  This is why Hafkenscheid’s images also bring to the surface a tension of mediated living.  Think of the image “Hess” which seems, strangely, like it may explicitly belong to a horror movie of one sort or another.  A fantasy gas station in a nondescript, blurred out landscape; the symmetry of tree tops and shadows framing the gaze with an appropriately mysterious ambiguity.  There is a suspense here – a terribly unphotographic suspense that is no less compelling for its betrayal of the medium. Instead, this suspense is preciselyimaginary, blurred into focus and focused so that the details implicate us in their gaze.  It was Paul Klee who declared that “objects now see me,” 5  but it is Hafkenscheid who brings to play the ways that representations manufacture those who gaze upon them.  These images are crystal balls – not telling their stories proper, but allowing us to story-tell for ourselves.

Think of “Motel Spuzzum” with its partially-revealed horizon line.  We cannot see what is waiting above the slope, yet it is the only thing in focus.  The sky blurs down into architectural intervention; the foreground blurs up and we cannot help but ignore our feet for the forcefulness of the sharpened gaze.  Here, there is no doubt that the eye is being led, but the mind is led as well, as we imagine what this mysterious scene might foretell.  When there is less detail, the gaze is inevitably more implicated in the image. The details require filling in, and the gaze understands this.  But this is why,  when looking at Hafkenscheid’s images, without knowing why, without intending to, wefeel implicated in the vistas before our eyes.  It is, in part, because we ourselves fill in the imaginative blanks, preserving our own moments of creativity through the collaborative act of viewing. For the remainder we must credit the artist for his manufacture of these focal strikes of imaginative possibility, these possibilities through which we tell his stories to ourselves in scale not reduced, but forever amplified by the very blur that is also a license to personalize the images before us.  These moments of silver suspension cause a rush of their own, a silver rush of imaginative possibilities that binds us to the image – that embalms the very imaginations implicated in the act of viewing.

Toni Hafkenscheid is a Toronto based photographer who was born in 1959 in Rotterdam, the Netherlands. In 1989, he graduated from the Rietveld Academy in Amsterdam and shortly thereafter moved to Toronto. During the following six years he was active in the arts community in Toronto and received several Canada Council and Ontario Arts Council awards. In 1996 Toni moved back to the Netherlands to pursue a career as a commercial photographer and to teach photography at the Rietveld Academy in Amsterdam.

In 2002 Toni moved back to Toronto, Canada. He is currently teaching at OCAD in Toronto. He is represented in Canada by Robert Birch Gallery in Toronto and Skew Gallery in Calgary and in the U.S. by Packer Schopf, Chicago and Marcia Wood Gallery in Atlanta. He has exhibited in solo and group shows throughout Canada, the U.S., Japan and Europe.

His works reside in a number of important collections, including the Canadian Museum for Contemporary Photography (Ottawa), the University of Toronto, the Canada Council Art bank, The Royal Bank Canada, the Center for Exploratory and Perceptual Art (Buffalo, NY), and Kodak France and Kodak Netherlands and Various Private Collections.

Ted Hiebert is a Canadian artist and theorist. His artwork has been shown across Canada in public galleries and artist-run centres, and in group exhibitions internationally. His theoretical writings have appeared in The Psychoanalytic Review, Technoetic Arts and CTheory, among others.