A commissioned text for The Natural & The Manufactured 2009

A CONCISE SUMMARY OF
MY NATURAL & MANUFACTURED LIFE 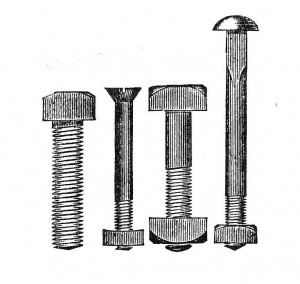 There were three females and one male in my family. In 1937 Modernism in style and process seeped into our home town’s (a Cajun village on the Sabine River separating Louisiana from Texas) consciousness. My medieval family, however, had not yet entered or emerged from the Great Depression, not to mention the fifteenth century. Modernism is irrelevant to the fact that the four of us functioned effectively as a family.  Nevertheless the differences between me and my sister soon demonstrated the difference between medievalism and modernism: as the younger daughter, my unfettered medieval imagination was preserved — unlike my sister, my parents kept me at home until I was twenty years of age.

Cajun country is a swamp along the Sabine River. Naturally, some very slimy fauna can be dredged from the waters of the Sabine, as well as from neighbouring Cow Bayou and from Bayou Petite Vache. After school, children would invite me to join them to snare and then display dead snakes, salamanders, toads or newts in artificial positions — on a driveway, lawn or patio. 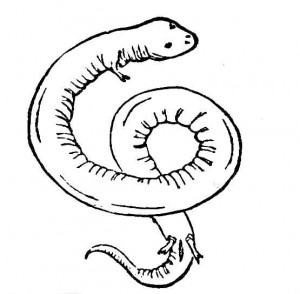 These displays were vaguely in the tradition of John James Audubon, who, bent on portraying their colours and textures in as precise detail as possible, killed birds in order to study them. Audubon posed many of the bird corpses in unnatural positions when painting their portraits. To us, however, contorting the amphibious bodies in unnatural positions was a prank.
consequences of living for two decades as an autodidact:

By age four, illiterate, with only dictionary pictures to ponder, I developed a compulsion to visually match pairings of so-called natural phenomena with so-called unnatural phenomena, compare naturally manufactured phenomena to human-only manufactured phenomena, to compare mass produced standardized objects with hand-crafted unique objects, to compare naturally standardized phenomena with unnaturally standardized stuff and on and on, etc. I indulged an obsession with every possible similarity and difference between anything and everything pictured in my dictionary. 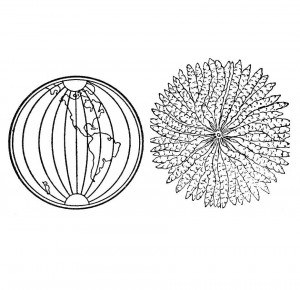 Naturally my mother had given me the dictionary. Profusely illustrated, it had been published in 1864. Looking at a particular illustration, for example, I could, with my malleable imagination free of logic, conjecture what it might be: 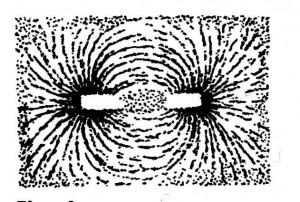 Figure 4 might possibly depict the kind of mask worn by the cannibals that first peopled the Sabine River swampland, or might document a spider mating dance, or it might be the results of steel industry tensile tests, or it could also be a textile design. In this way I began to visually inform myself about cultural anthropology, invertebrate biology, structural engineering and home economics respectively.
a note on the absence of modernist rationality:

In due time my sister, having been educated according to modernist principles, entered high school. I had, by then, figured out how to read English, but even so it was too late to have learned how to organize binders or notes. I just couldn’t seem to recognize categories or to compose or to draw clear outlines. 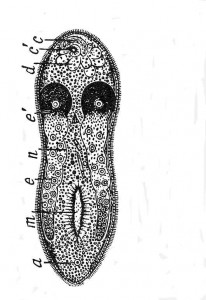 I never caught on that it may be important, for example, to distinguish a pancreas from a German expressionist portrait from the sole of a bedroom slipper from a euglena — no that wouldn’t be correct. I am familiar with euglenas and they have a tail. 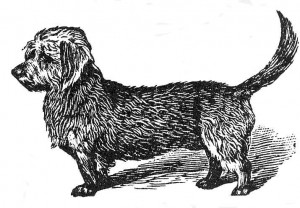 The high school principal, Achilles Pickett-Houston III, owned a Dandy Dinmont, a distinctive  breed of dog whose characteristics must conform to American Kennel Club specifications, such as ratio of tail to body length, distance between eyes and ears, density of “eyebrows,” etc. When I eaves-dropped on a conversation between Pickett-Houston and the Presbyterian minister Mr. Whitehead, I heard that evaluation of a Dandy Dinmont must be systematic, and above all standardized. “In Nature there’s no such beast as a Dandy Dinmont,” I realized, “That dog was designed to be a Dandy Dinmont before it was born.”

Some of the men folk recounted stories of hunting a beast pretty much like the feral hog found in Nature, but even in a little Sabine swamp town the most numerous hogs were the manufactured kind, sharing the life cycle of the Dandy Dinmont, except that technically speaking the Dandy Dinmont is not made of meat.

at last, a formal education:

The bayou waters were teeming with flora, fauna and wee beasties too — protozoa living their watery lives unharmed. When I entered medical school at age 22 (how I accomplished this is a comment on the education of children), I was skilled at identifying wee beasties in drops of urine, blood or water under a microscope. 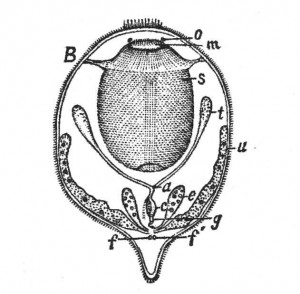 My first day in Contagious Diseases lab I focussed the microscope eyepiece on something  appearing to be a standard issue filthy bedpan, yet too impossibly small to be a product of the hospital equipment industry; too tiny even for use by an ailing sea monkey. It had to be a parasite.

Just because something looks natural, and especially if someone claims it is natural, obviously it may have been manufactured. As an obsession, this truism hardly contributed to my doctorly prowess. Indeed, having access to a library plenteous with medical tomes (this was in 1959), my compulsion to collect pairings intensified. 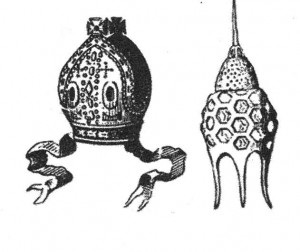 This is a pairing from my early 1960s collection: the image on the left is of a limited edition hand-crafted sacred Roman Catholic mitre whose shape is reminiscent of a zillion-and-still-reproducing microorganisms for which no American Microorganism Club is necessary to standardize the breed. Since I was ten years old I had beheld illustrations of such unicellular fenestrated tripodiplasts, which, like so many inhuman species, standardizes itself.
after twelve years of behaviour i’d rather not divulge 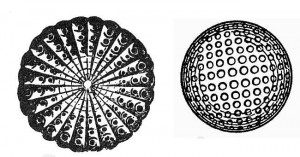 By the time I was forty years old I had collected at least eighty thousand paired images that are both alike and different, each image finding its place along the spectrum between two extremes: 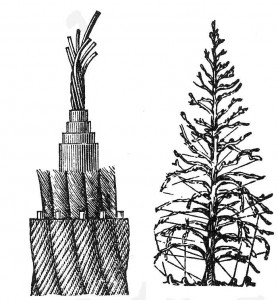 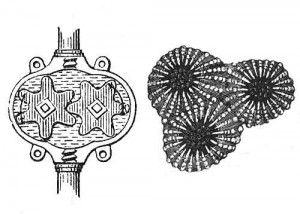 Confined as I currently am to a bed in Sunset Manor, I continually review these eighty thousand pages of illustrations. As time passes more imagination and reflection is necessary to detect the similarity between some of my 21st Century pairings. 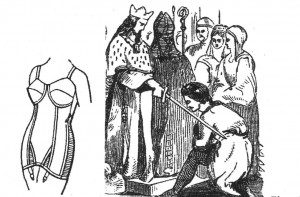 to be continued between the not-yet-ended and the end……….