Approaching the Yukon with fascination and awe, Volcano Collective researched
Yukon life and attitudes through conversations and interviews. They met people at
restaurants, at the Dawson City Music Festival, during the Tr’ondëk Hwëch’in First
Nation’s Moosehide Gathering, in grocery stores, and on the streets.

Learning that dogs hold a distinctive role in Yukon lore – and are even popularly
thought to outnumber people in Dawson City – led Kazmer and Koenker to focus
their story-gathering on tales about dogs. Whether they are pets, working sled
dogs, or hunting companions, dogs are a link to wolves. Stories about our
relationships with canines can reveal some of our desires to connect both with
another species and with wilderness.

The resulting mixed-media installation Northern Howl immerses viewers in
a choreography of audio recordings, projections and sculptures, including a
pneumatically-driven “breathing” sculpture that boasts images from the local
landfill – one location where our professed love of wilderness is challenged by our
daily habits. 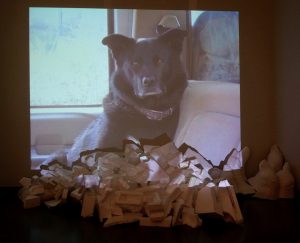 In the centre of the room, rotating lights inside a glowing paper sculpture cast
shadows of dogs and bears against the paper’s surface, echoing the way firelight
changes a shadow’s shape when the flames move. This central installation is
bracketed by recreations of the constellations Ursa Major (the bear), Canis Major
(the dog) and Lupus (the wolf).

The invocation of star-gazing and fire-watching – both longstanding human
activities – reminds us that it is an ancient human habit to respond to the natural
world by inventing mythologies. Two hybrid wolf-dog sculptures in vitrines embody,
through their monstrous uncanny mutations, the possibility of mythological
creatures still waiting to evolve. 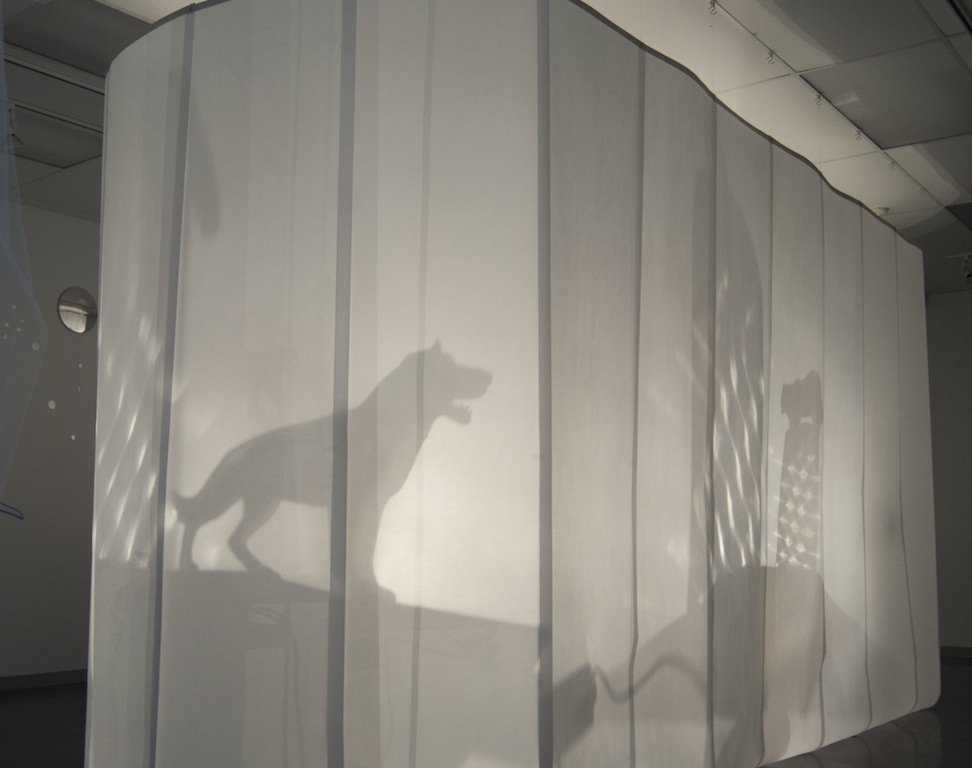 KAREN KAZMER (Vancouver, BC) uses installations and public artworks as ongoing investigations of architectural space, and human and animal interaction, originating from an interest in the body as messenger. She has worked with light, mixed media and pneumatics in producing exhibitions for galleries in Canada and the U.S.

DEBORAH KOENKER (Vancouver, BC) is an artist with interests in writing and curatorial projects. Her years of teaching as Associate Professor at Emily Carr University of Art and Design have been an integral component of her art practice. She received a B.A. from the University of California, Santa Barbara, did post graduate work at Central St. Martins in London, England, and earned an M.F.A. from Claremont Graduate University in Southern California.
Koenker works in a variety of materials and media, making prints, drawings, sculptural objects and installations. Her installations explore sociopolitical themes using a range of media (photography, collage, sculpture, audio, text, drawing, embroidery) to produce a strong visual and sensory experience. Her work has been exhibited in Canada, Mexico and the USA over the past 30 years.

As an immigrant to Canada, Koenker is interested in borders, globalization, migration/immigration, and the difficulties of cultural integration, building community, and social justice. Personal narratives are increasingly important to her practice; her 2016 Kelowna Art Gallery exhibition Grapes and Tortillas, for example, includes texts written by temporary seasonal agricultural workers from Mexico who come to work in the Okanagan Valley, BC and across Canada.